Specs Made Easy with ARCAT®

Explore the Installation at Concordia Lutheran

Explore Our Case Studies >>
Why Karndean?
Environmental
Contact Us

Posted on the 7/9/2019 by Karndean Designflooring

In our last blog, we explored the classic herringbone pattern and some traditional-style variations. For projects that allow you to be a little more daring with the herringbone pattern, we have options to fit more contemporary aesthetics by playing with color! Consider one of these bold and playful herringbone designs. 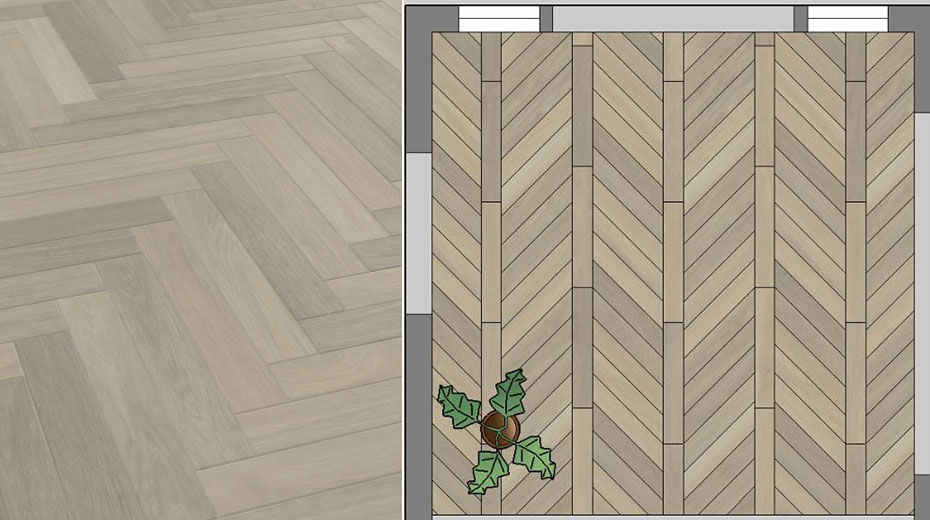 Easily transform your traditional herringbone pattern into a daring one with a "broken herringbone." In a broken herringbone layout, the pattern is interrupted (broken) by a row of straight planks at the point where the two angled pieces would meet. You can create this pattern with any size plank, including our parquet planks, which work well in smaller spaces such as a narrow corridor or an office restroom. 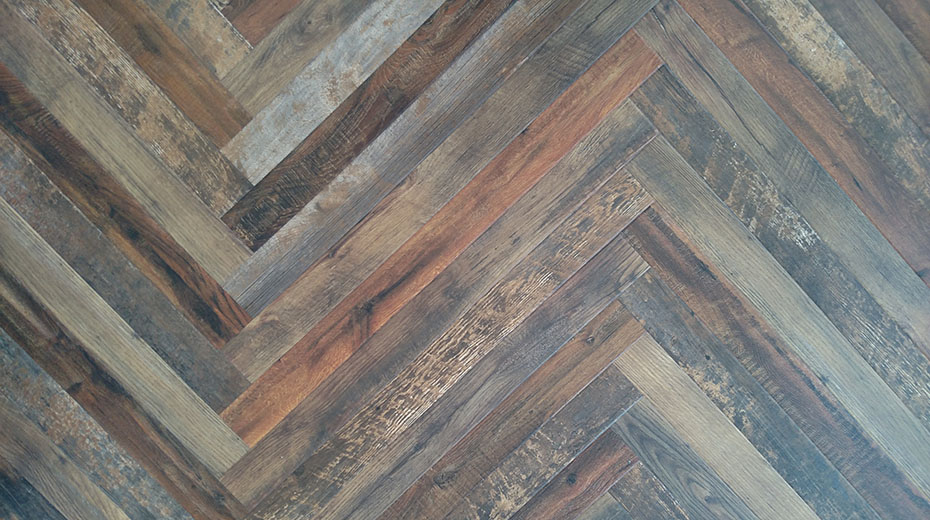 Keep in mind that you could do this with virtually any pattern, but blending multiple colors into one design allows you to create a unique look by randomly mixing colors together. Blending is a terrific design option with rustic-looking floors, such as the Da Vinci blend shown above, or if you want to create a floor with high color variation. You could also create a beautiful rustic herringbone using our three American barnwood herringbone planks (part of the Korlok Select range). 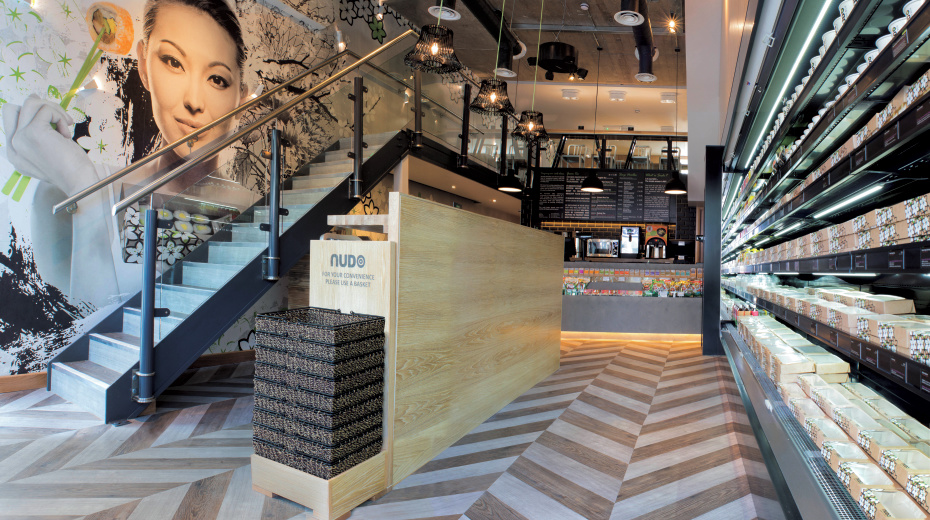 Create a bold zig-zag pattern by alternating colors horizontally or alternate colors vertically to break up the pattern, as shown in the chevron above. Depending on the size of the room and the selected colors, this could be overwhelming; however you could use this to create an "area rug in an entryway, around a reception desk or under tables in a common area. 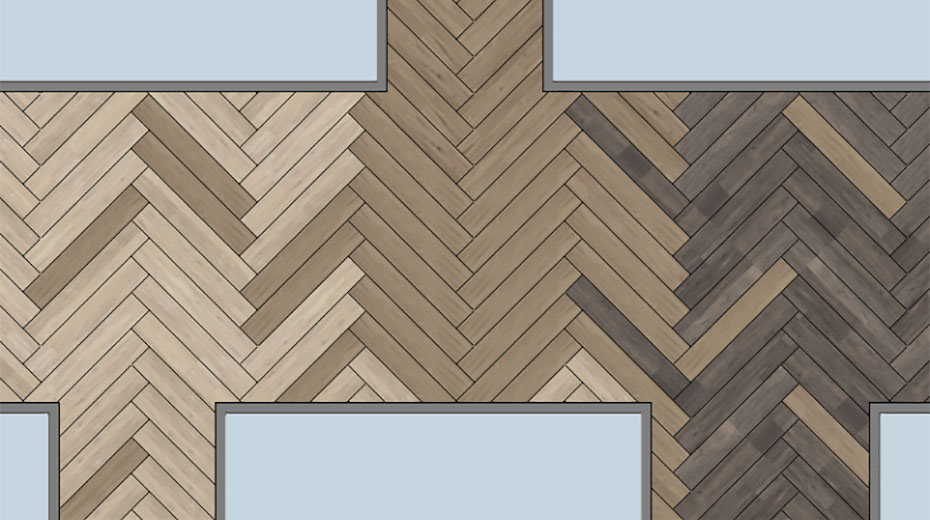 While the blended herringbone has a mixed assortment of multiple colors, an ombre transitions from one color to the next, generally from darkest to lightest color. Use this effect to transition from one area to the next within an open floor plan. 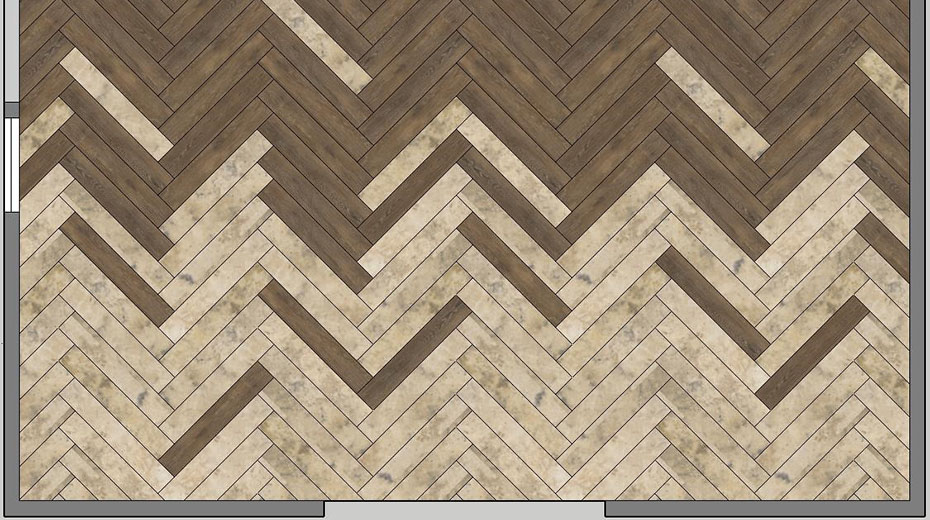 You could also transition between spaces by transitioning your herringbone from a wood look to a stone look. We have several stone gluedown visuals that are available in a plank size format to make this transition even easier. The example above shows the Dusk Oak wood plank and the Washburn stone plank together. Other stone look planks available include the industrial Russus and Texo, concrete inspired Textum, and travertine inspired Caldera and Gallatin.

What really sets Karndean Designflooring apart the ability to design with planks and tiles, which allows you to have control over the look of the floor.

Have you designed a daring herringbone floor? Share a photo with us on social media using #Karndean!

*This layout is not compatible with our rigid core products.